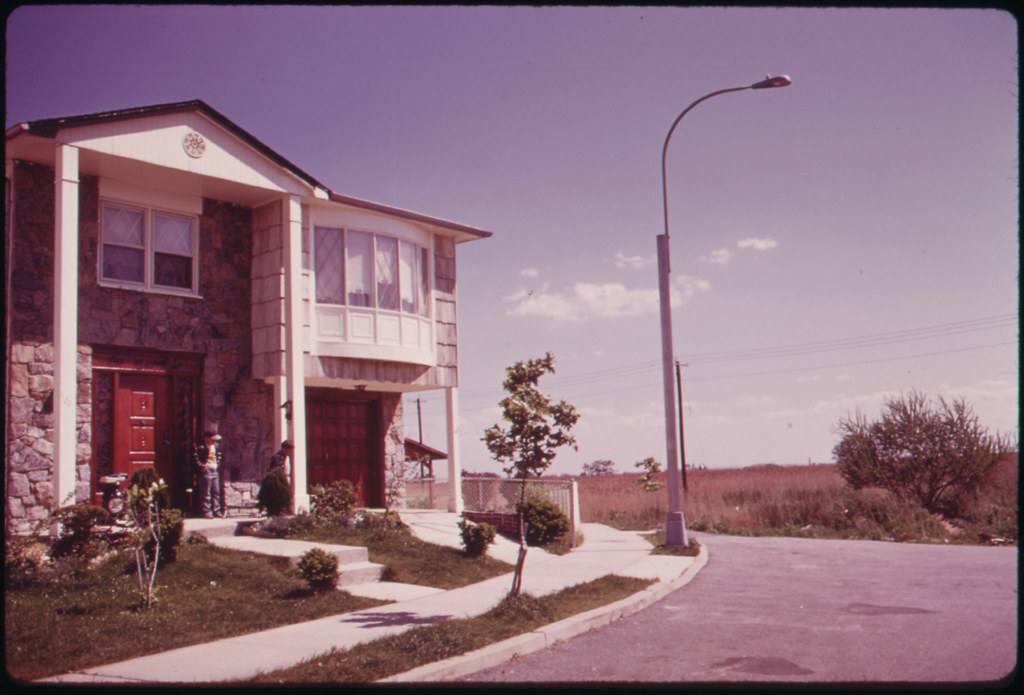 Recent development at Great Kills, Staten Island, 1970s. from Documerica, NARA which is down right now 😦

1) A call went out over a listserv from a community organization in an affluent neighborhood, calling for volunteer archivists to come in and arrange/curate/preserve their A/V and ephemera. Something like two dozen archivists showed up and a great day was had by all, and the community’s memory, hitherto imperiled, was secured. Earlier that month, the same group of archivists got a request from a poor-neighborhood high school to come and work on some records from the school’s old site. Two of us went.

We move among strangers, and we cleave to friends, and the neighbor is neither of these things — close enough to us not to be fully alien, far enough from us not to be intimate. Think of the Louis CK bit where his neighbors watch his kids while his sister goes (apparently) into labor — neighbors care about us enough to help in extremity, but don’t care about us so much that they share our suffering in extremity such that they’re crippled by it. Good neighbors are at one remove from our domestic pathos.

The line from Mark about loving your neighbor as yourself, which gives us the Pauline command that in Him there is no Jew or Greek, no master or slave, that there no longer, with the coming of Christ, are strangers at all, nor even neighbors, but only friends, is obscene. It stands outside and overturns all social relations, more than any other text from Christendom. It overrides even the neighbor’s interest in being loved. Seriously, what if your neighbor does not want to be loved as yourself? What if that is icky? What if the person scavenging outside your restaurant knows he’s a human being, thanks very much for putting that in your sign, and as a human being sees the offer of free peanut butter and jelly every day as more demeaning than it is nutritious. Moreover, as a human being, conceivably he sees your sign as a public demonstration of piety, ultimately more about declaiming your own goodness than helping him, usw.

2) Seems like archivists have, since Ferguson, got turnt for the oppressed, impoverished, the marginalized, and the subaltern, right? There are analogues to the Documentation Strategy period here, but with important distinctions. Chiefly, much of the work of the Documentation Strategy sought to compensate for the reality of some ethnographic disappearance which was already virtually complete — be it the assimilation of language communities into the whitebread mainstream, the loss of a town’s mill jobs, the erosion of a faith tradition — thereby effectively sealing the deal. Current work, on the other hand, publicly disavows the ethnographic character of documentation, and is deliberately about affirmation — preserving the texts of activists so that they may not be misunderstood.

The archivists’ role in these documentation-as-affirmation scenarios is Paulinian: we are not strangers, we are friends of the record creators. This is problematic. Where the archivist is a Paulinian friend, the communities with the richest variety of friends, or indeed with the richest friends, will have the richest documentation, the deepest records. This is a problem the digital humanities has all over the place: Why, just to pick on one city, does the University of Richmond publish products like this coolish 3-D map through its Digital Scholarship Laboratory, while VCU Libraries has a more modest — arguably more useful — version of the Baist atlas up, and Virginia Union University has squat? Because UR is rich and lily-white, VCU is a big public school, and VUU is a small historically black college. If you accept that digital humanities works (unintentionally, sub rosa) to reinforce privilege — and I mean, you don’t have to accept that based on one example, do what you want, live your lives — surely you should fear the specter of archivists reinforcing privilege in the same way, with the same good intentions. I mean, I just watched two dozen archivists clamor to do spring cleaning in a rich neighborhood, and beg off of work in a poor one. We’re choosing who our friends are, I mean, because that’s what you do with friends.

3) I’m not sure I need to belabor the idea that conducting archives transactions at the level of friendship jeopardizes archives and archivists in real ways, but: One reading of the Belfast scenario is that it’s all about friendship: Ed Moloney, as a friend of Boston College, gets to publish from a collection that no one else gets to; Anthony McIntyre, as a friend of Queens University Belfast, gets to publish from closed sources; all their interviewees thought they were working with friends. Then along comes the PSNI, the state, investigating the murder of a neighbor — not a friend, but a snitch — and all the friends swim in the tout boat. A little professional distance, a little less familial privilege, at any point in the chain would have served everyone admirably.

Probably as you’re reading this you’re thinking this is far more an exercise in psychoanalysis than in archival-or-any-other theory, and at this point you would be right. Basically all my bêtes noires have to do with boundaries between and you’ll forgive me for dropping into digital-speak creators and stewards of content being poorly drawn: lawyers who think that archives are a vault; University presidents who think they own their email; archivists who want desperately to be loved doing favors for their friends. None of this stuff — from Penn State, to Oregon, to the Diocese of Rockford, to Hillary Clinton — happens if we’re just neighbors to the collections, just neighbors to the creators.

4) The sovereign and the archives go hand in glove. We tend to think that the archives has been the province of the archons, following Derrida, the ones with the hermeneutic power and the right, and we tend or poop I tend to style myself as an anti-archon — through description and reference and outreach and access I am relinquishing control of this stuff to you the user and you should make it mean what you want it to mean. But my work, and yours I’m saying, isn’t really like that.

If you read your Agamben, and you have, or you’ve at least watched this ehh video while making the fiddly-so-so hand motion, you recognize that the power the archons wield is sovereign, we work in a zone of exclusion, yes, but that the material we have power over also lies in a zone of exclusion, that the collections are as a body, bare life. The collections come to us, they accrue to us, in an almost environmental fashion. They accumulate, like snow, but snow that you have to ask for; they multiply, like rabbits, but rabbits that aren’t that into each other. The collections have no anima, no direction, no polis; though they’re the product of human political life, we regard them — at accessioning, appraisal, processing, as zoe as natural life. Readers see the collections differently, using (or, and this annoys me, leapfrogging over) our descriptive regimes to reanimate the bios. When we cull or weed — even our common verbs for appraisal, records management, and deaccessioning are about extinguishing vermin, or separating the weak from the strong — our archives are simply exposed to death without significance, without being sacrificed.

I’m probably theorizing away what’s really just a tic of the profession — proceeding deliberately, moving gently — and I’m not a pox-on-both-their-houses left-anarchist, I LIKE GOVERNMENT AND I WANT THE POWER, but I can’t ignore the harmonies Agamben conjures between bureaucratic liberal democracy and bureaucratic fascism, and if that boils down to the bureau being the culprit, well then, what then for us the neighbors to collections, for those of us who clip the coupons from other peoples’ shares and have glasses on our nose and autumn in our soul?